My final project discusses possible applications of cooperative robotic systems, operating in various industrial verticals. Based on this research, we illustrate the swarm phenomenon in a model-scenario as a service robot for the shipping industry. 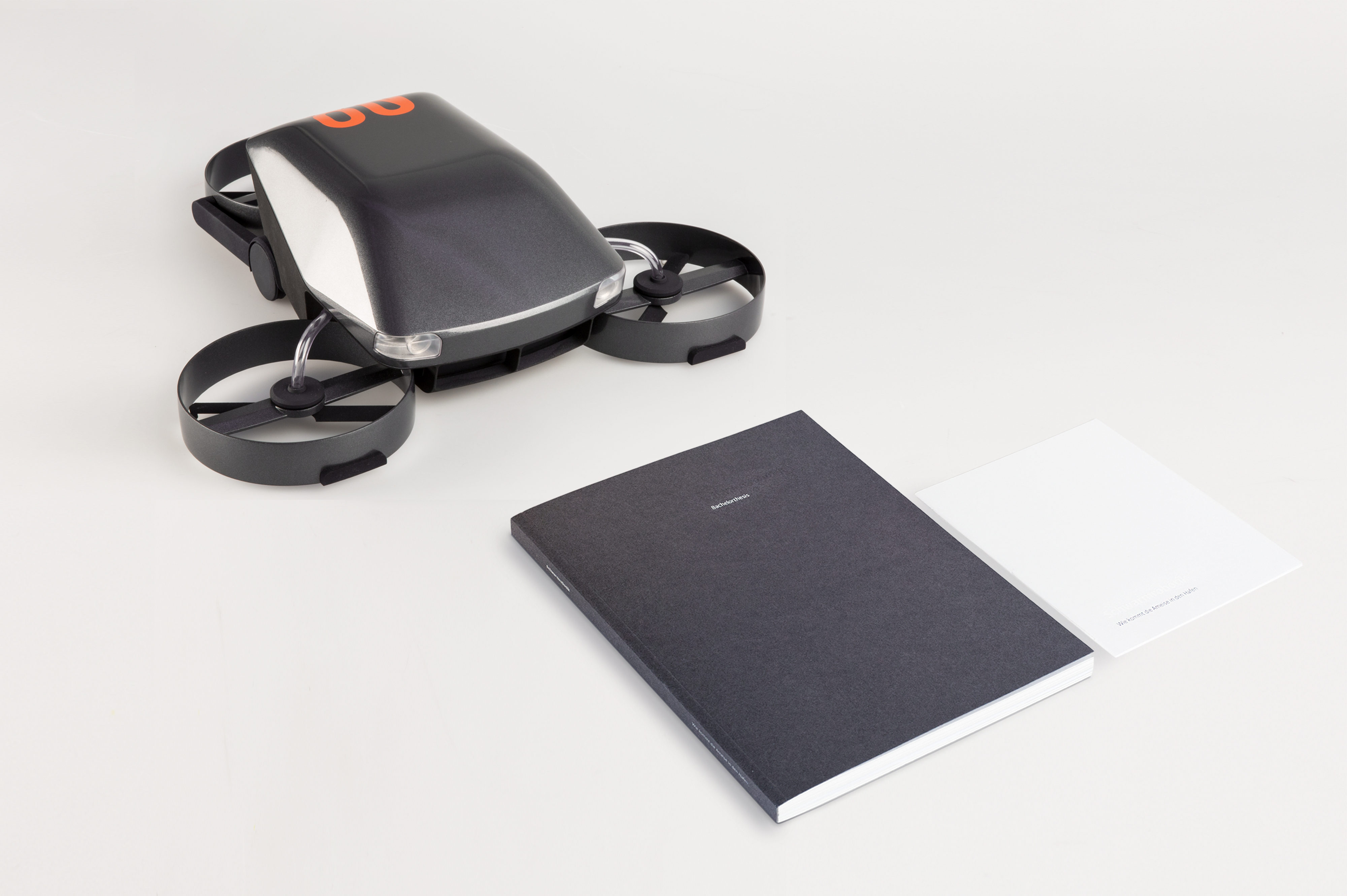 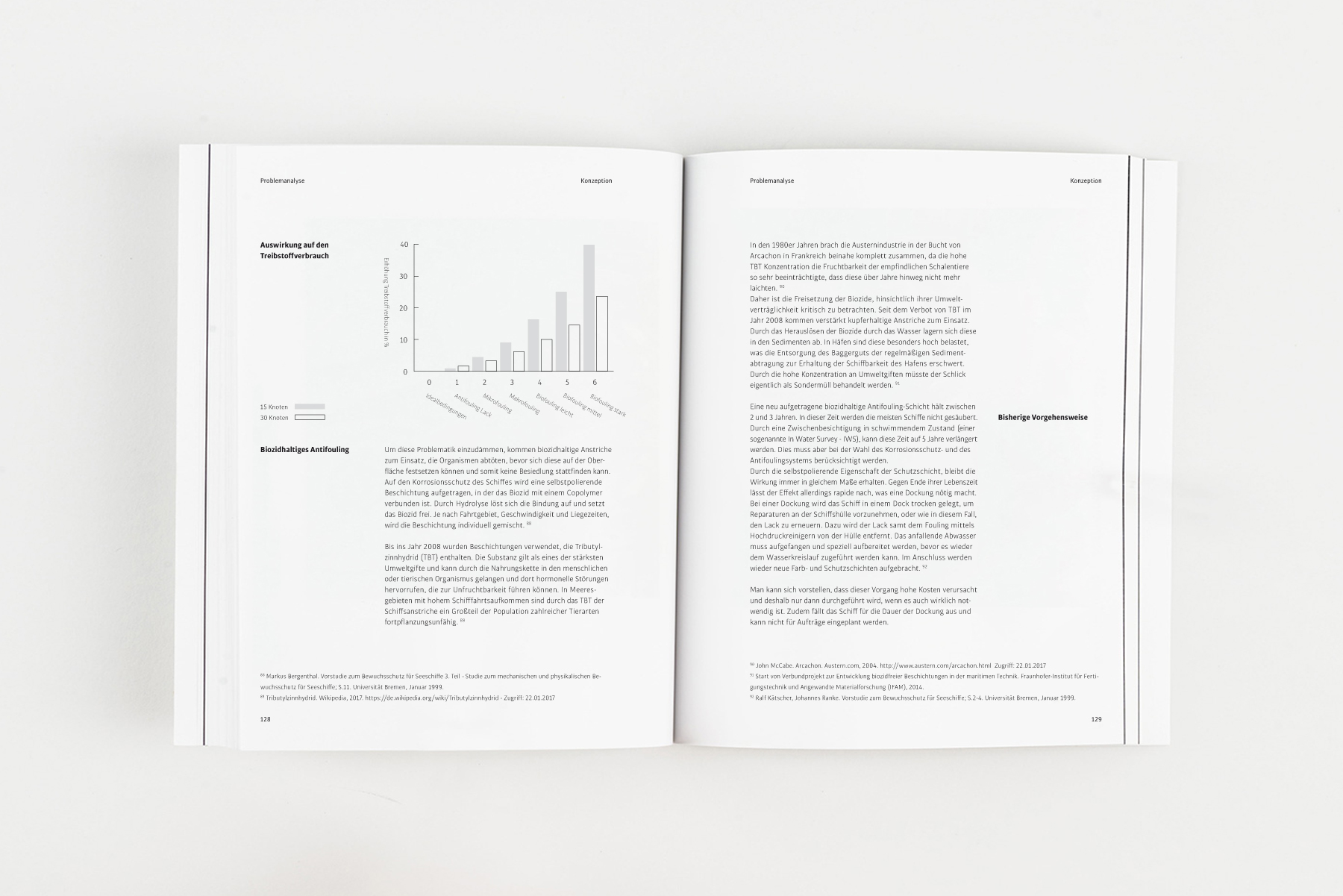 Swarm Robotics, as a technological field, withdraws its concept from the scientific disciplines of biology, informatics, and robotics. It is inspired by the observation of social insects, flocks of birds and fish.

Natural swarming behavior is based on the observance of simple rules and the individual‘s natural social appetence towards the colony, allowing the group to achieve more collectively. One single ant, for example, has a limited behavioral repertoire – however, the self-organized, social interaction within the colony reveals behavioral patterns and results, that exceed the individual‘s capability. This phenomenon is also described as collective intelligence: the whole is more than the sum of its parts. 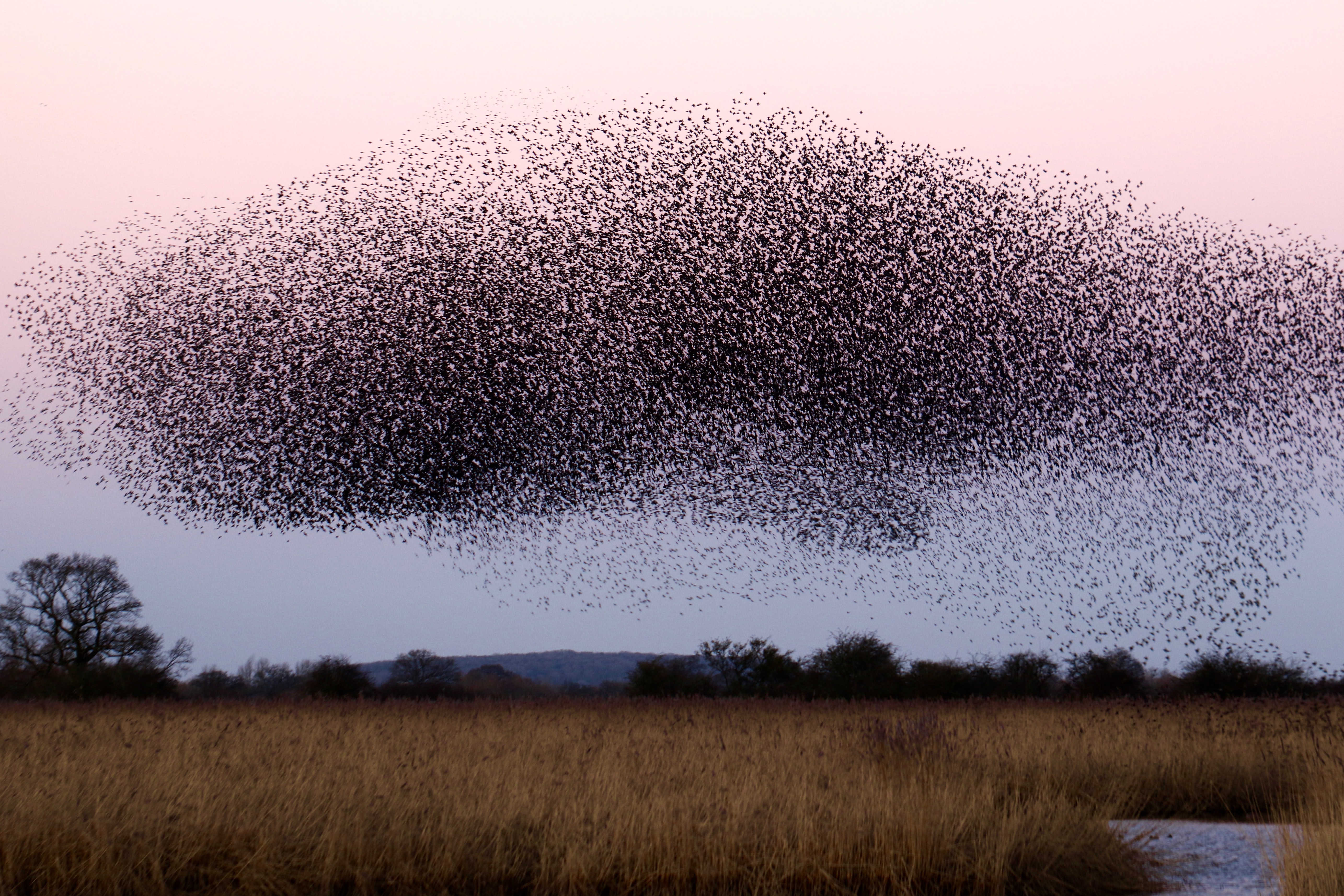 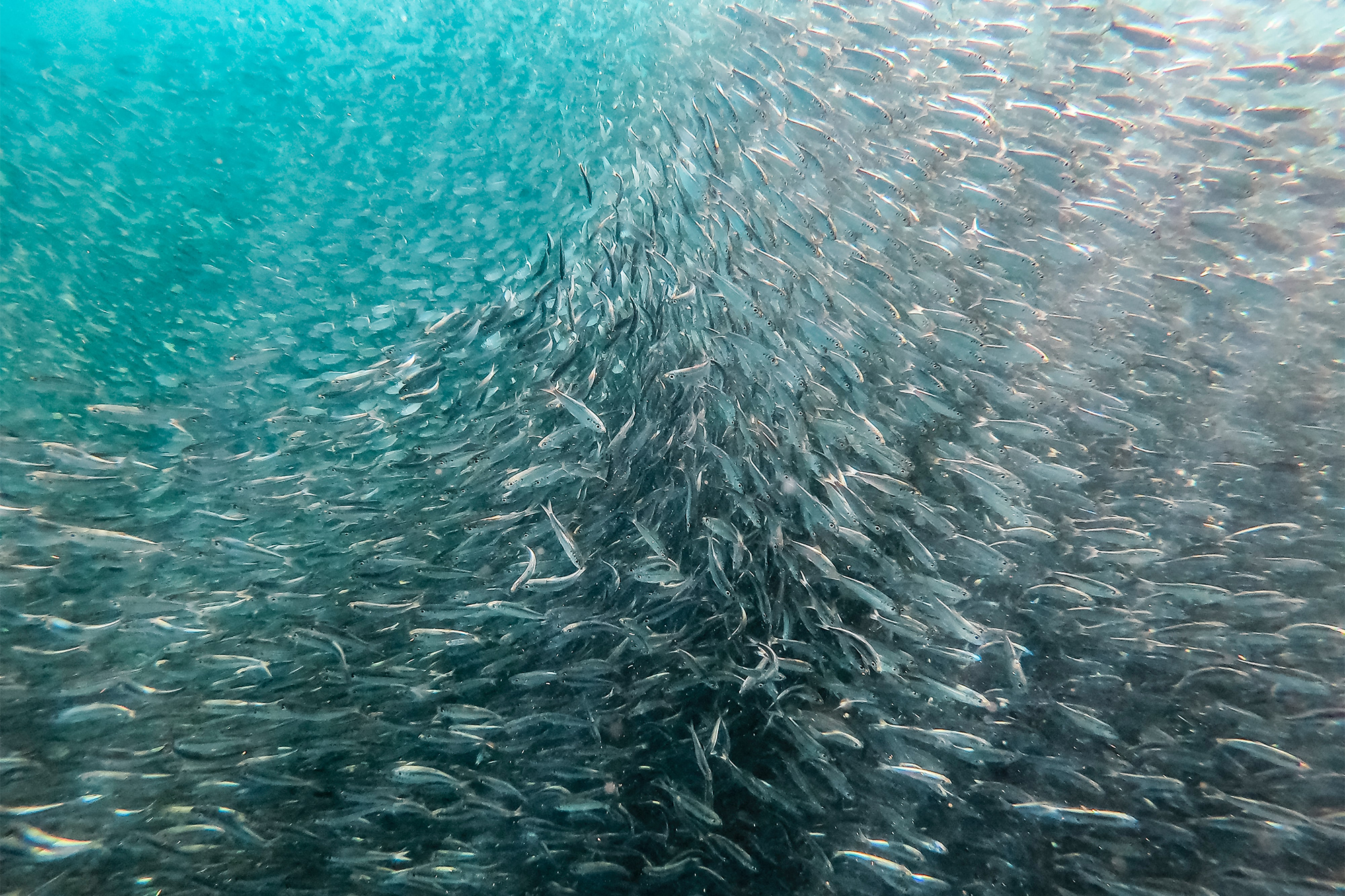 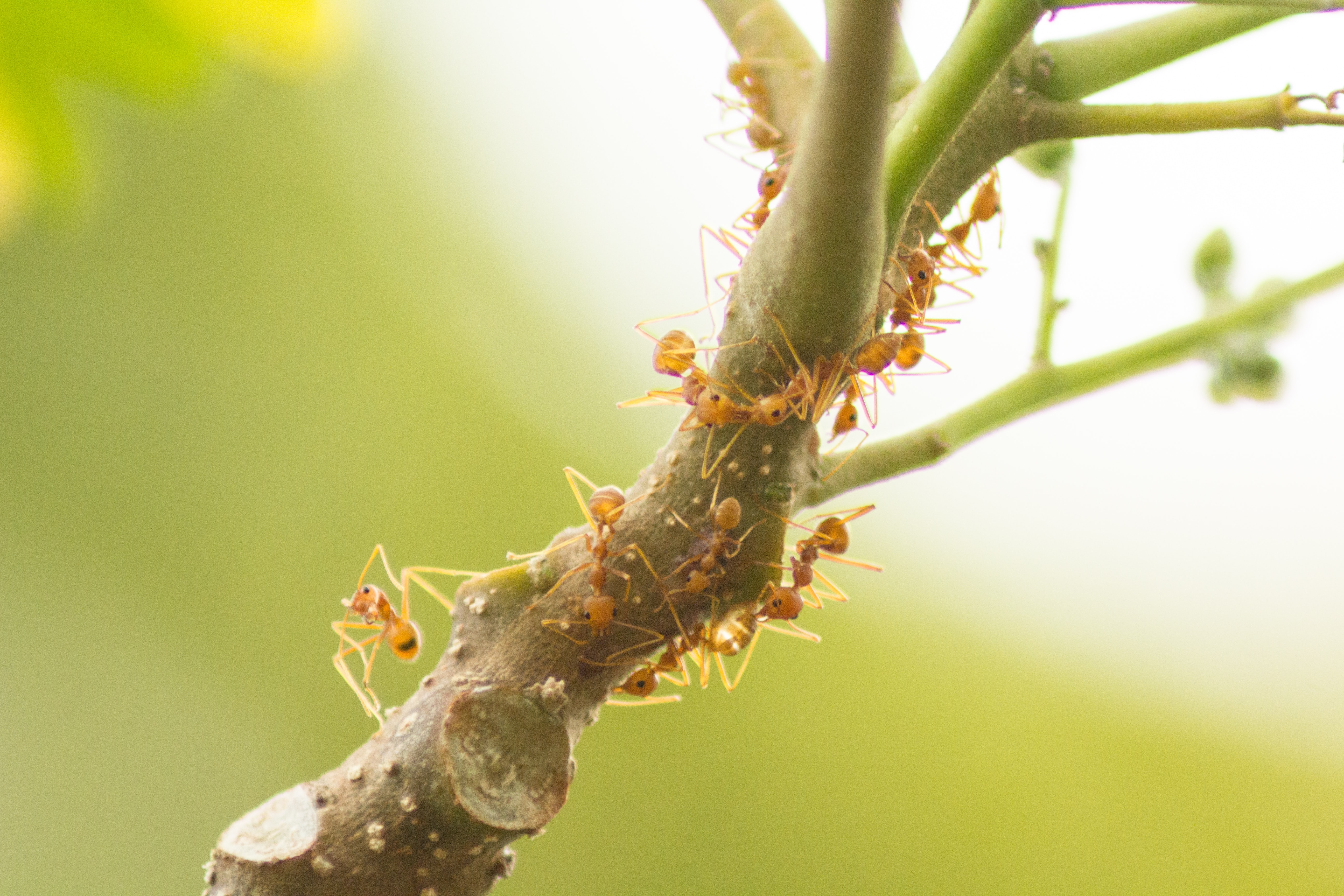 The field of Swarm Robotics investigates the possibility of solving complex tasks by programming swarm-like behaviors between simple robots. In this project, we examine potential applications in which the various features of ‘natural swarms‘ could be beneficial. Scalability is one of those features: a swarm can be adjusted to changing work conditions through extension or downsizing. Moreover, it is showing high resistance against malfunction, as the outage of a single unit can be compensated easily. This sturdiness is of an advantage, when robots are operating in an environment that‘s inaccessible for repairs or if they‘re performing operations, in which the eventual loss of units is expected beforehand. Swarm robots try to imitate the natural swarms‘ communication model, communicating indirectly through the environment, giving the ability to work in unknown and undeveloped environments, where direct communication can‘t be performed. For example, underwater, where the use of radio waves for long ranges is problematic.
‍
Examining possible applications of swarm robotics in various surroundings, we tried to find environments that would make optimum use of the swarm‘s advantages, while taking into account accessibility, environmental conditions, the required task‘s danger, etc. Environments that meet these requirements are for instance outer space, or on a smaller scale, the human body. We further researched three application scenarios, eventually developing one into the basis for our design concept.

– our design concept illustrates the ‘swarm phenomenon‘ as a system of service robots at harbors for the shipping industry. The harbor meets the requirements that were set up in order to take advantage of natural swarms‘ features and properties. Moreover, the robots‘ measurements are in a tangible range, providing a sufficient formative and visual design potential.
Scenario 1
– human medicine may fall within the scope of possible applications for swarm technology. Prototypes of nanorobots nowadays measure just 1/500 of a hair in diameter. If those would learn how to move through the human body autonomously, they could be used to deliver drugs selectively to diseased cells.
Scenario 2
– swarm robots operating space missions. The robots could be used for either surface mapping or harvesting of possible resources from the moon or mars.
Scenario 3 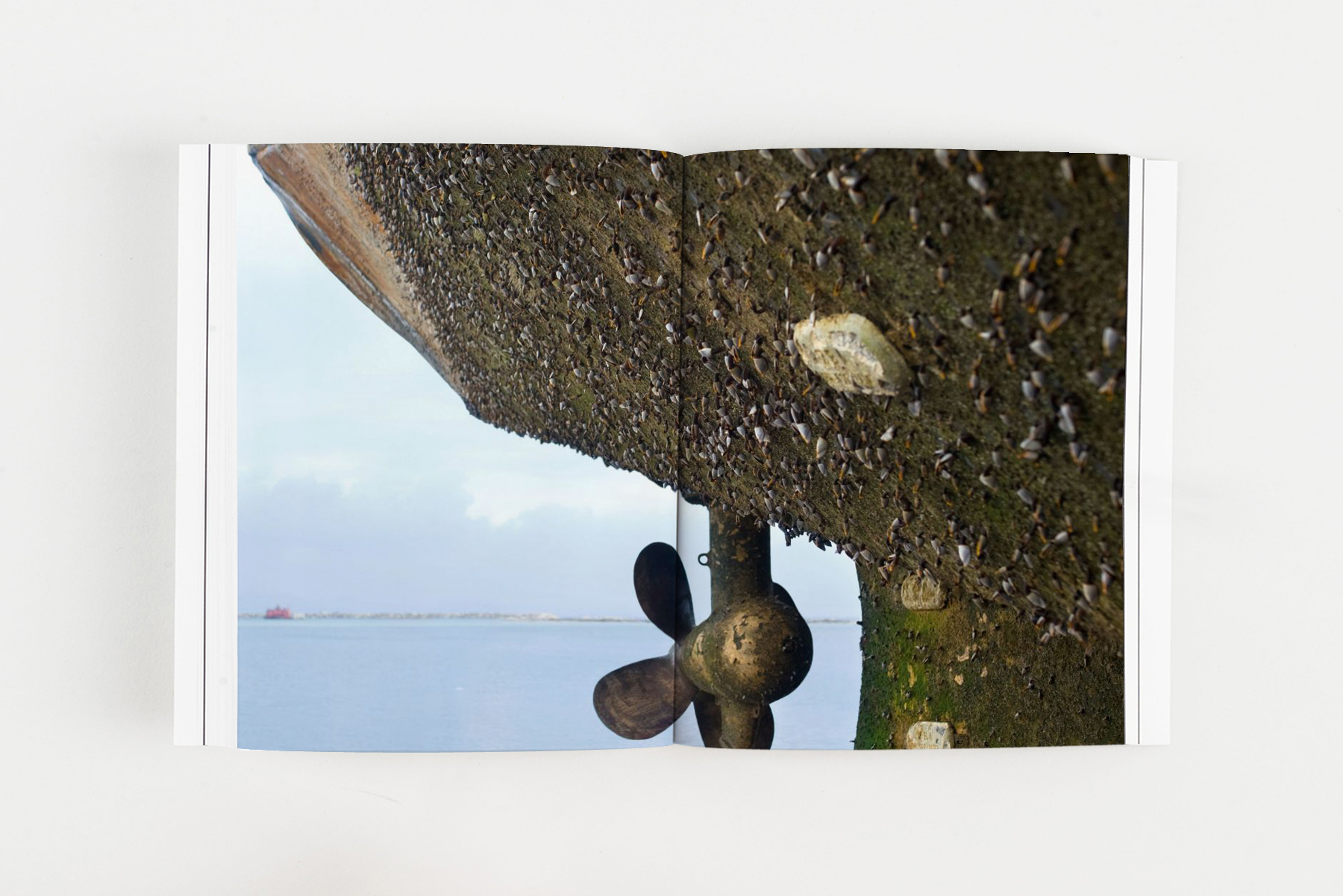 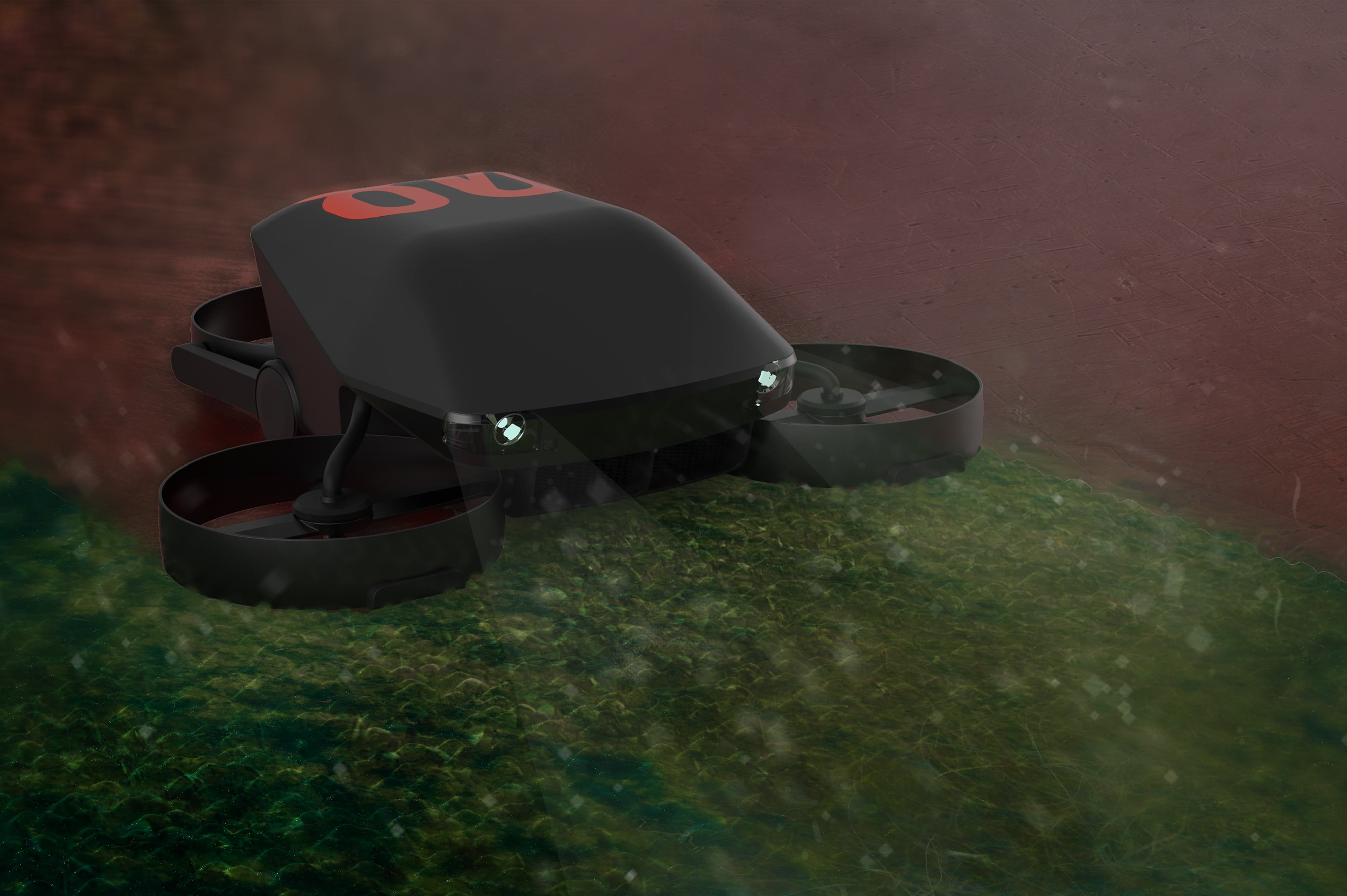 Alternatively, our concept describes a swarm of robots, based in a harbor terminal, purposed to clean container ships during loading and discharging operations. We used the ECT Delta Terminal in the Port of Rotterdam, Europe‘s largest seaport, as a base of orientation for our project.

Blending seamlessly with the regular processes at the harbor, the swarm system offers both economic values through extending the time intervals between dry-docking servicings, as well as an environmental value by reducing the number of pollutants released to the sea.

The system consists of autonomous units exploring independently the port basin for newly arriving ships, with which they are programmed to engage. The cleaning of the vessels is carried out gently with highly pressurized water. Active robots serve as a stimulus for others, inducing them to join, while task allocation is regulated by the principle of stigmergy, as it is found in natural swarms. The other swarm agents‘ drive to join cleaning operations done by active robots increases exponentially with the number of participants, with an upper limit placed. For instance, if 10 is programmed as the upper limit, then the 11th robot would be stimulated to continue exploring for other vessels rather than joining. 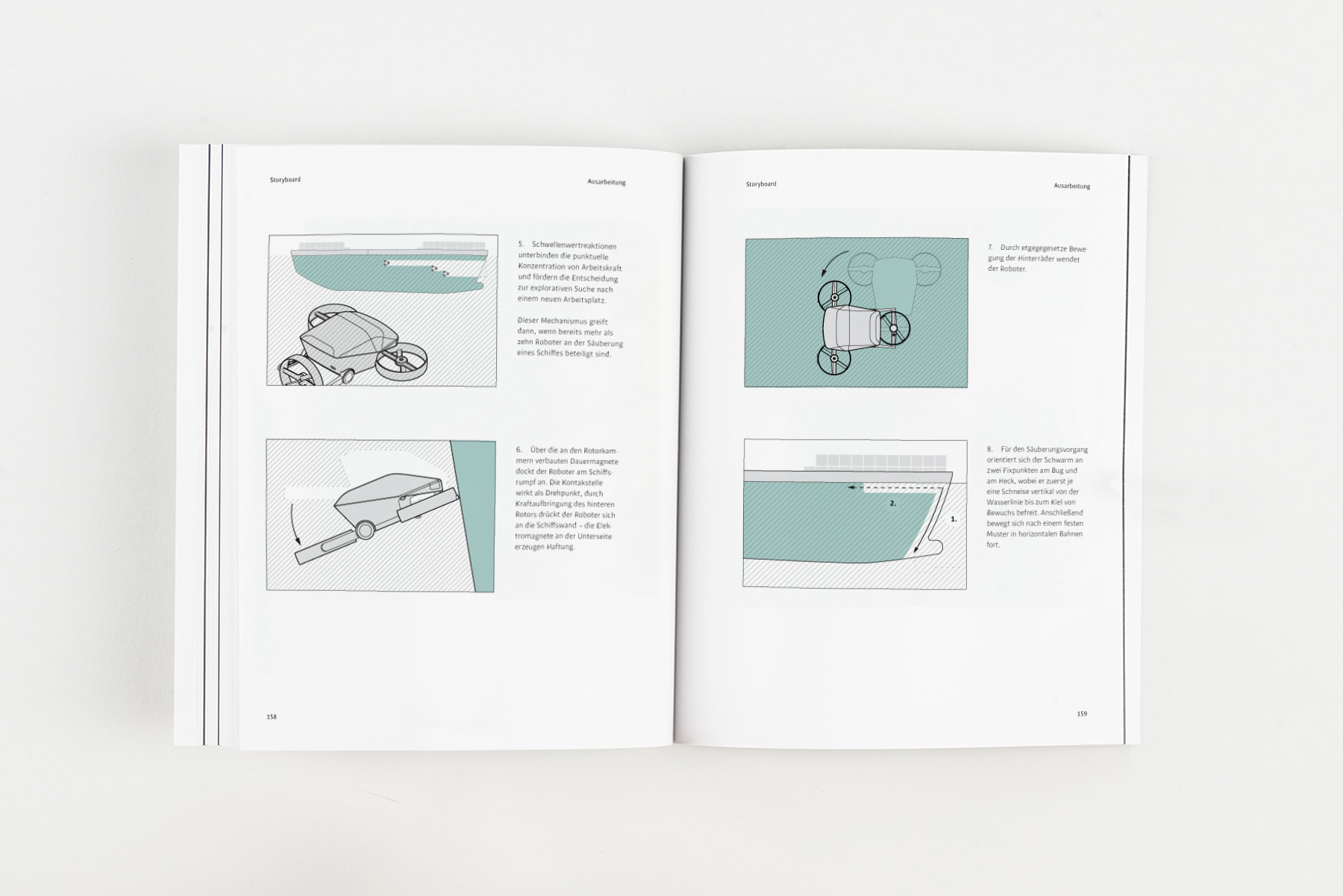 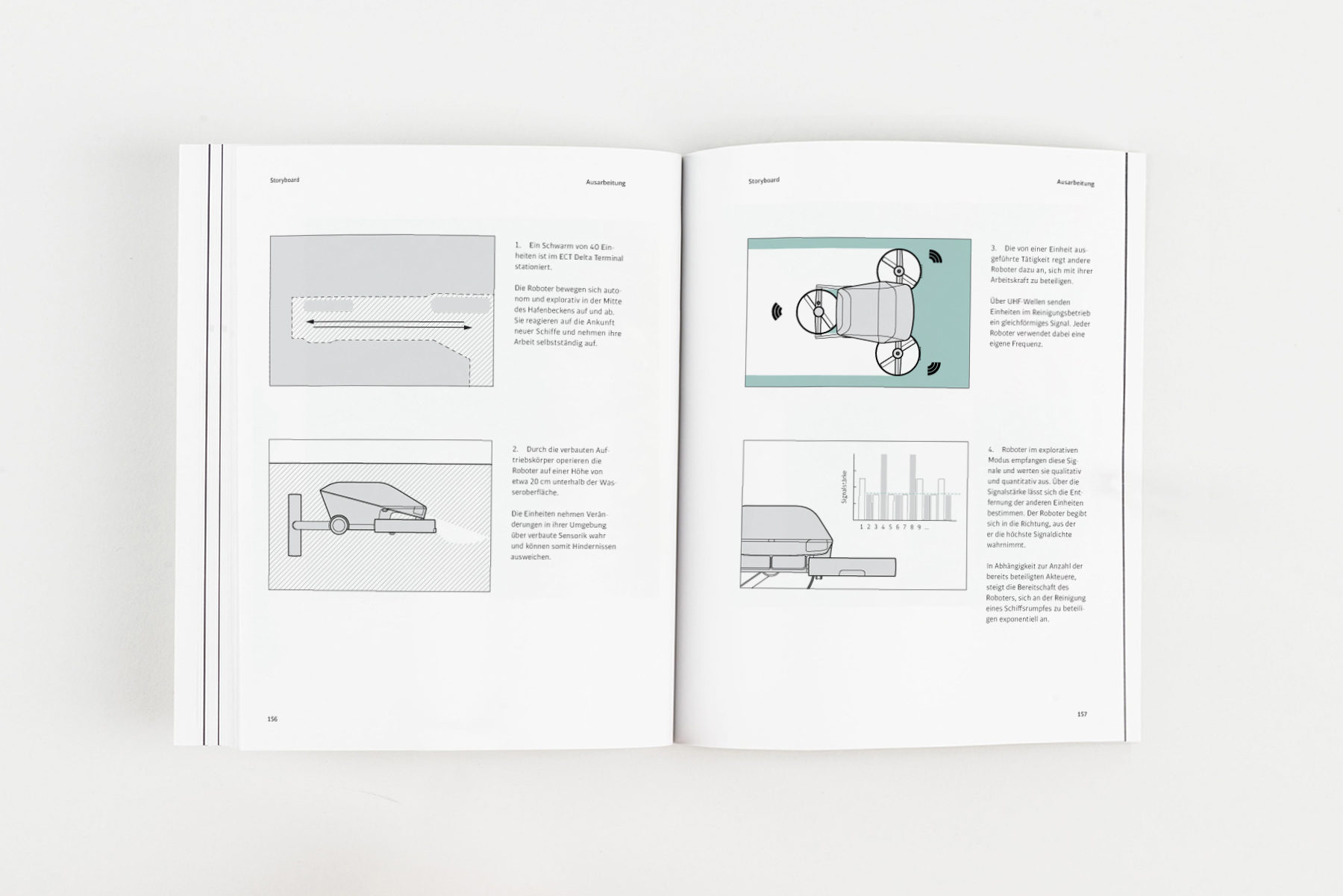 While for the ECT Delta Terminal ~40 robots are adequate, the system is scalable and thus adjustable to size and activity in any terminal. Moreover, there‘s no dependency on any single link in the chain, as all robots are identical and the swarm can operate with any number of members. 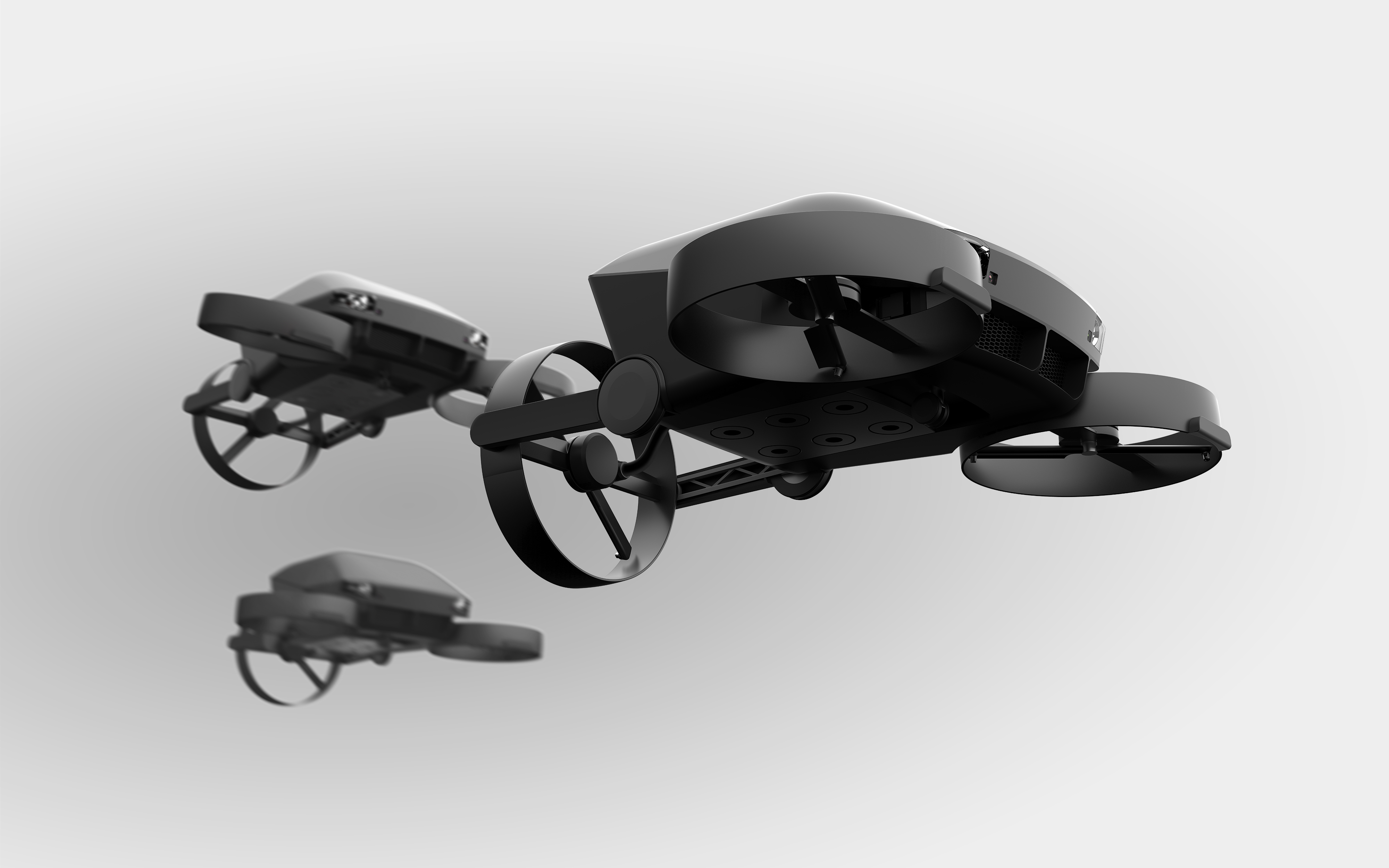 The rear rotor propels the robot in water, while the side rotors are used for steering. Flotation is achieved through integrated floatation panels. Cameras and motion sensors enable orientation. Once recognizing a newly arriving vessel, the robots attach through their bottom electromagnets, repurposing the rotors, switching them to cleaning mode. While connected to the ship, the robots move, using magnetic wheels.
Swarm robots in exploration mode 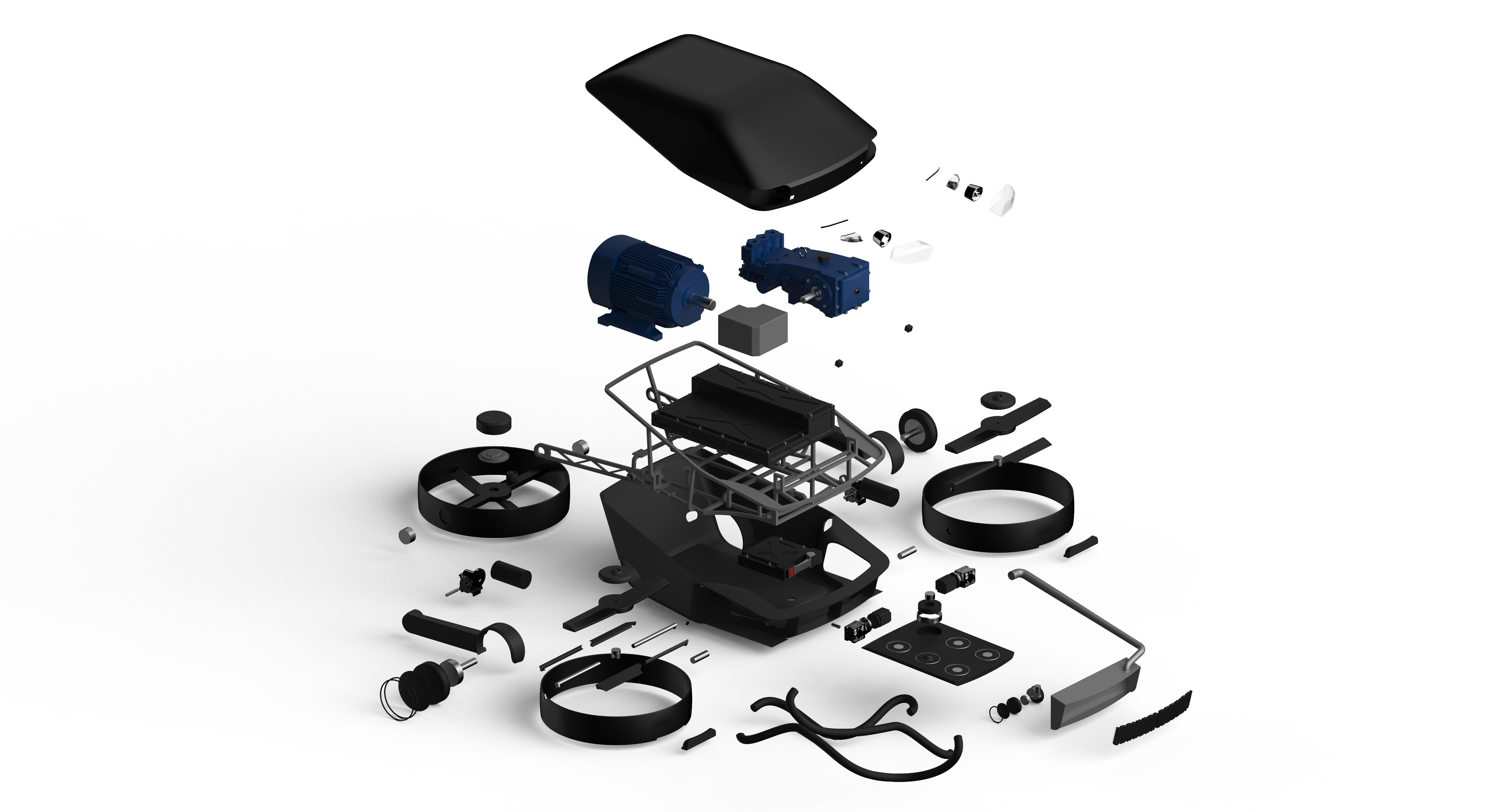 We built a 1:4 scale model of our robot, using selective laser sintering technology. The pictures show the coating and assembling process.
Rendering of the robots inner cage and components.
Model making process 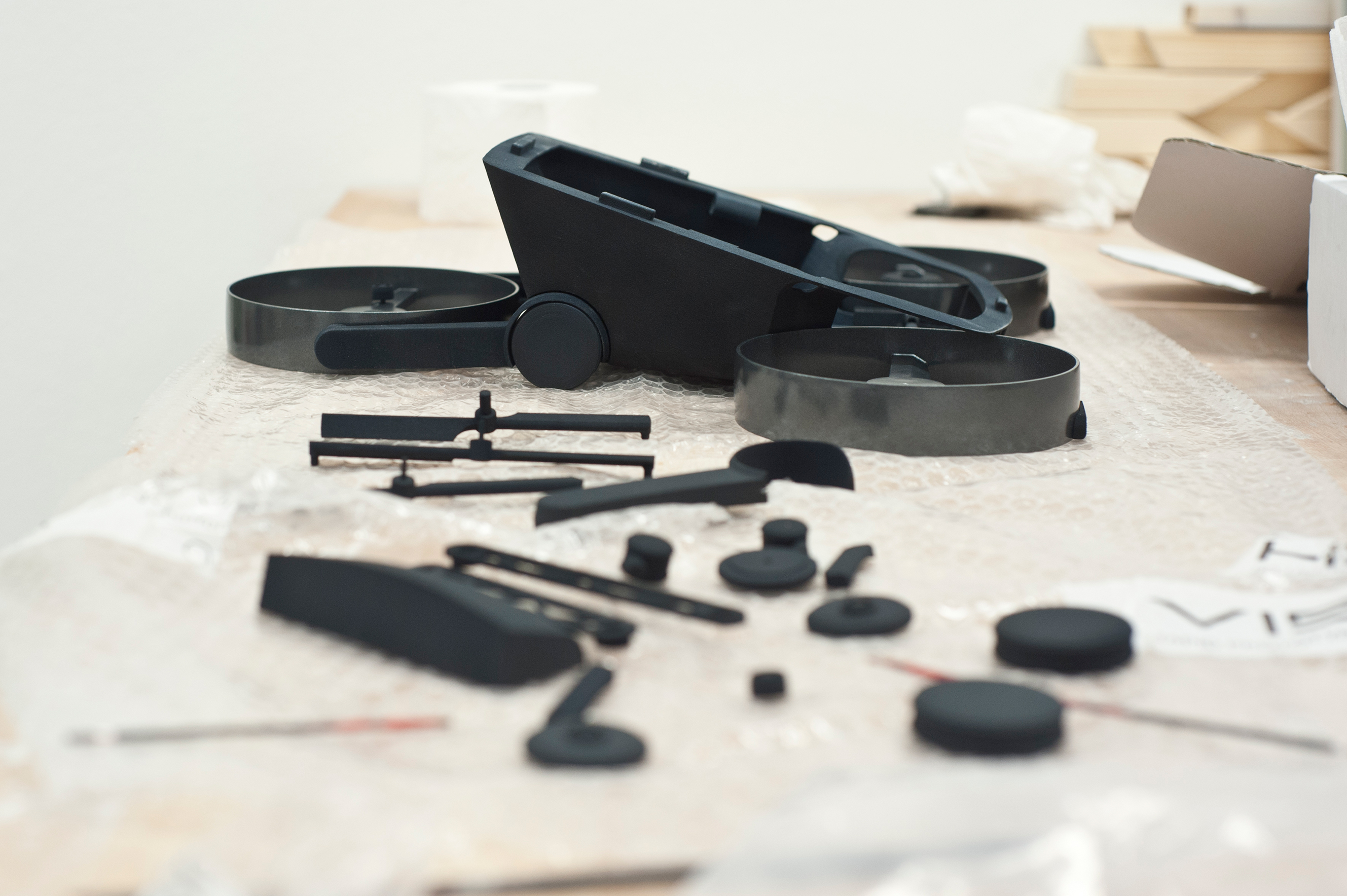 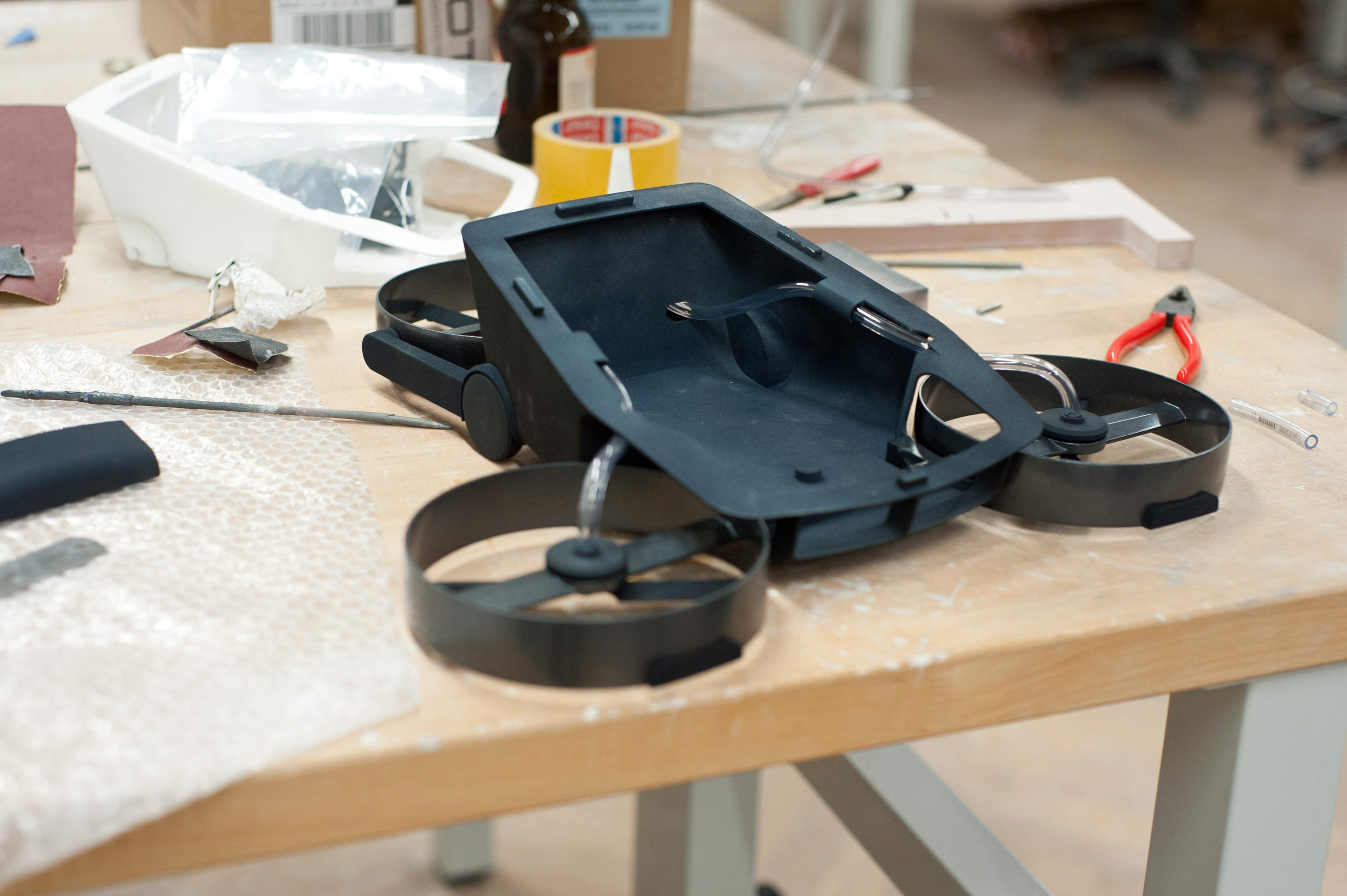 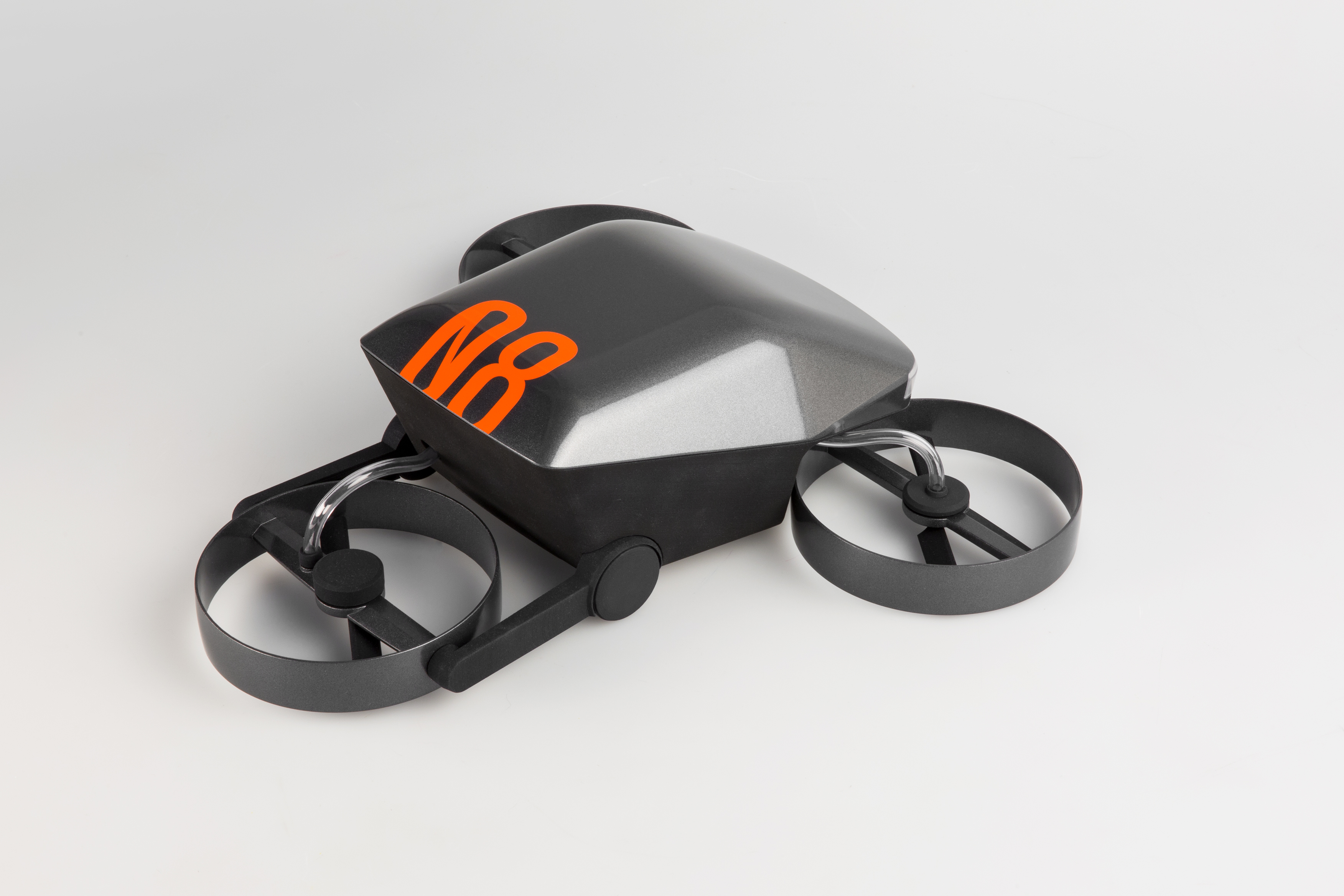