An interactive web project that retells Italo Calvino's 'The Distance to the Moon.' Visit q-archive.com to view the project. 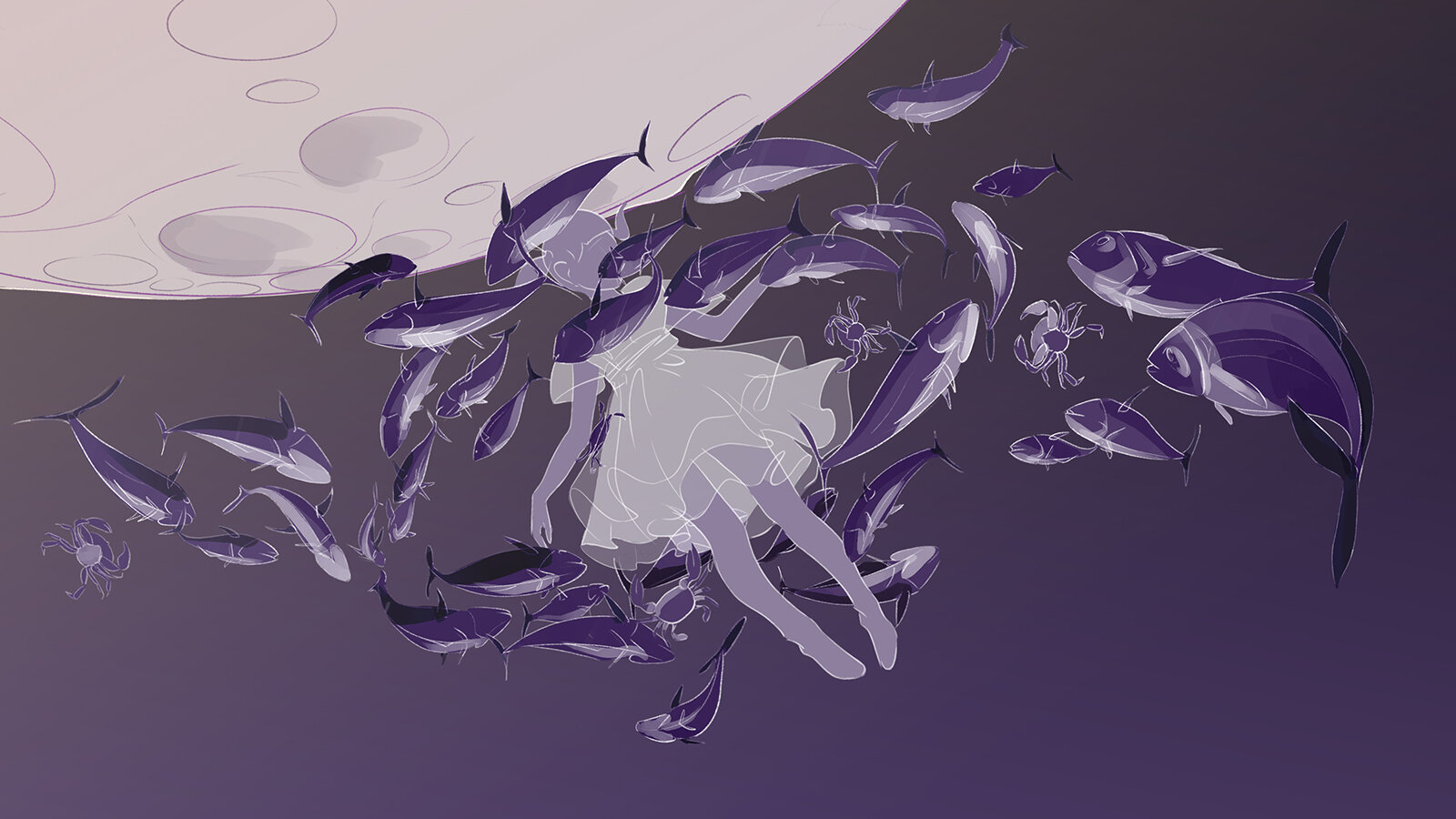 Q’s Archive is a narrative project that retells The Distance of the Moon, a short story by Italo Calvino. The project takes form in an interactive website that, using 2D animation and 3D modeling, presents artifacts preserved by Qfwfq, the protagonist of the story, as well as fragments of Qfwfq’s memory.

Synopsis of The Distance of the Moon

Q is part of a crew that went up to the moon to harvest moon milk. At this time, the moon and the earth were so close, that the crew would row out to the sea and climb onto the moon with a ladder. The crew grew nettles of feelings for each other under the moon. Q fell in love with the captain’s wife - Mrs. Vhdvhd, but Mrs. Vhdvhd was in love with Q’s cousin, who was only in love with the moon.In one expedition, the crew noticed that the moon was slowly drifting apart from earth. Upon this realization, Mrs. Vhdvhd remained on the moon, anticipating to be stranded with Q’s cousin. Yet in the last minute, Q’s cousin returned to their boat, and Q stranded herself with Mrs. Vhdvhd instead. On the moon, Q’s love remained unrequited. When the crew finally came to their rescue, Q seized the first chance to return. But Mrs. Vhidvud was determined to depart with the moon, knowing that if Q’s cousin loved the moon so much, this was the only way his gaze would follow her. So she remained on the moon, and no one was ever able to climb onto the moon again. 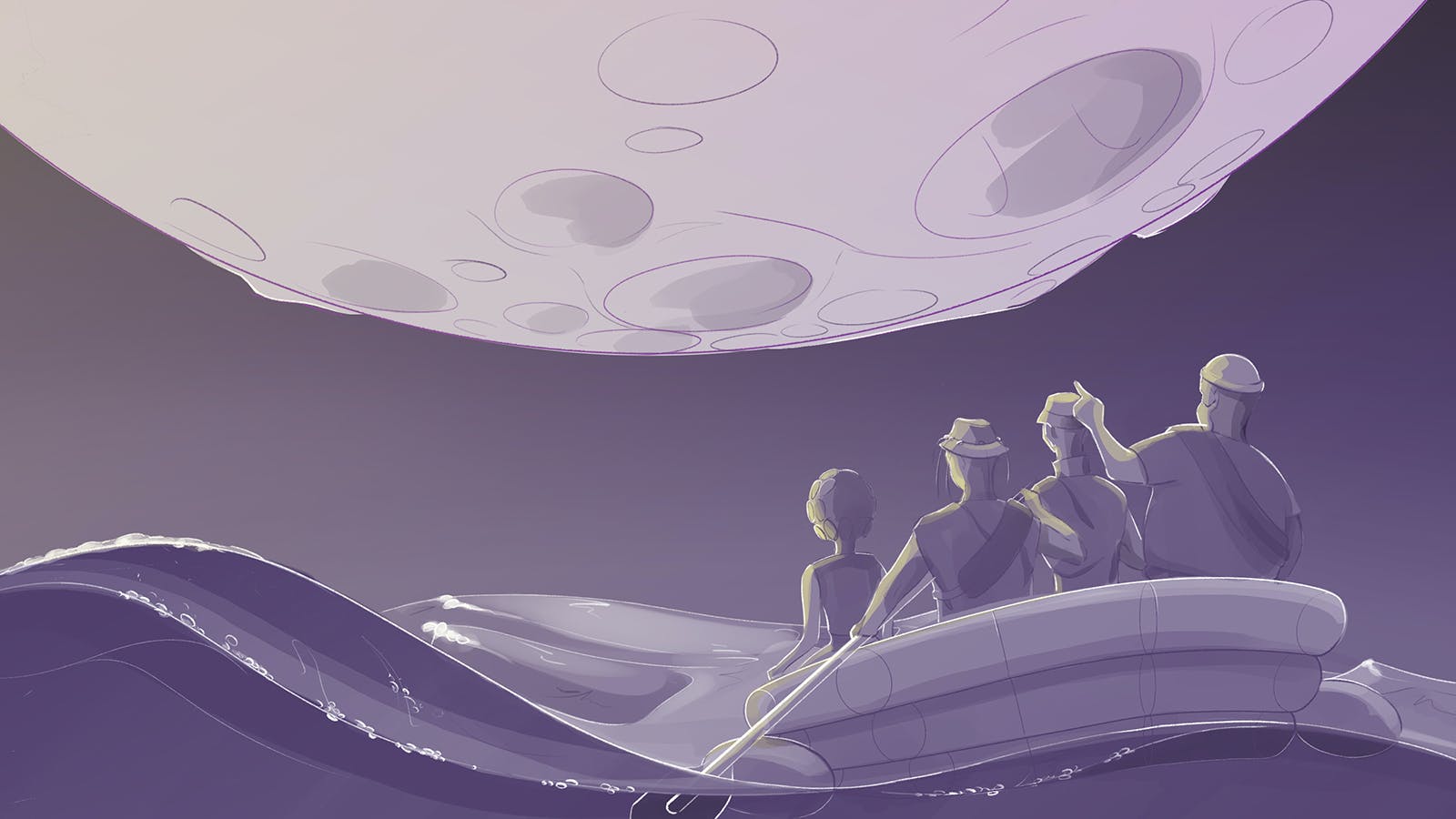 The world in Calvino’s story has a primitive feeling, yet the characters and randomly mentioned objects were decidedly modern. Informed by that, we set our story in a world that is distantly post-apocalyptic. Most of our contemporary landscape is covered by the sea, and the people scavenge floating objects, primarily plastic, to construct everything.We made design decisions to inform an aesthetic that bears contemporary traces but are technologically primitive. We looked at DIY objects constructed from plastic waste, as well as fashion and fine arts that are collaged from trash. 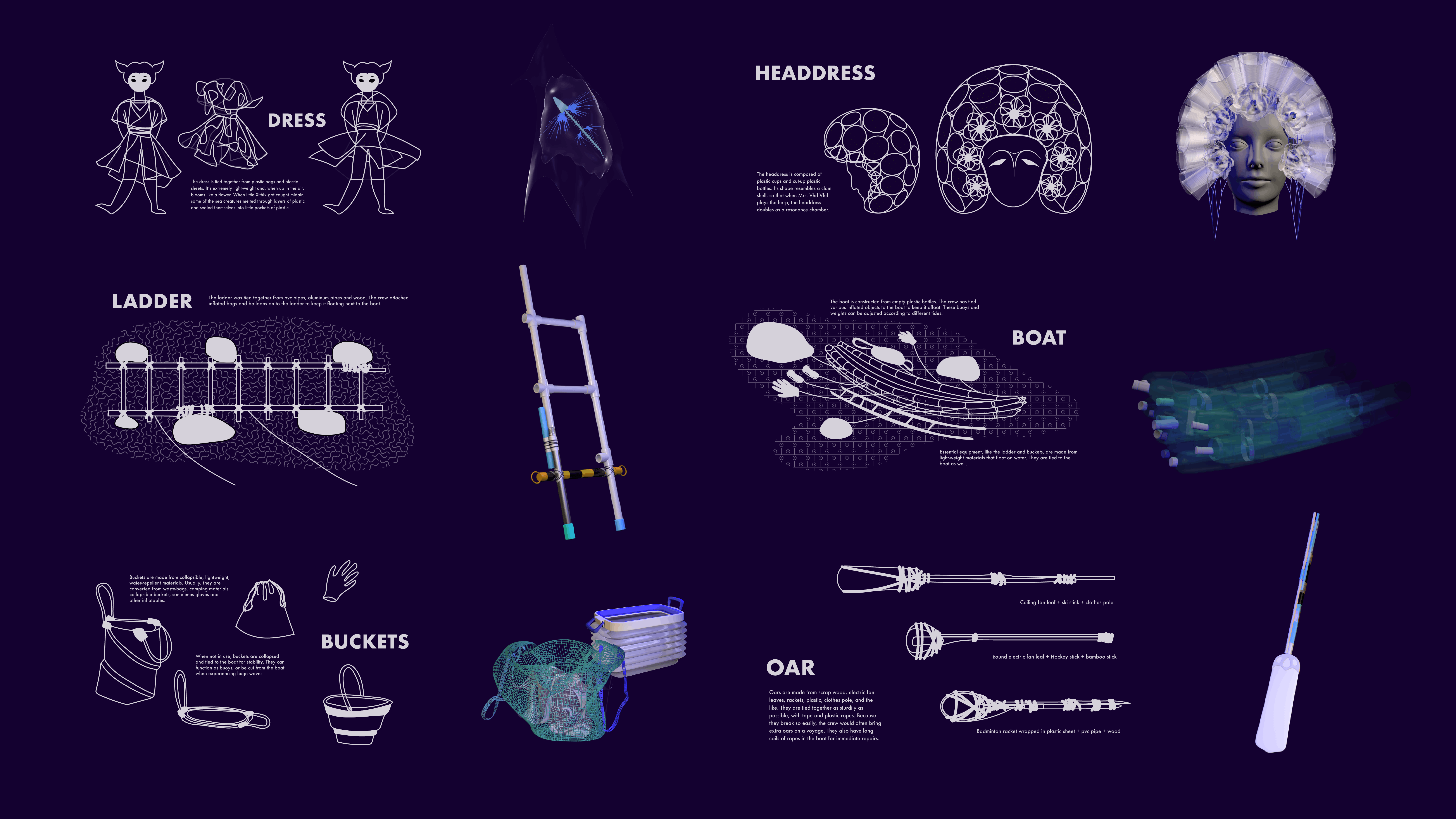 The website is structured as an archive, curated by a team of archaeologists Franchan, about the event documented in The Distance to the Moon, estimated to have happened in twenty five hundred seventy nine (2579) AD.Six artifacts are showcased chronologically on the website, serving as entry points to the story. Interacting with these objects on the website, the visitor will trigger animations that are snippets of Q’s memory. Voiceovers that narrate passages from the story are interwoven into the navigation of the website.

We are exploring how 2D and 3D media can work together to enter a story from a partially obscured but specific angle. While the project is not about climate change or trash, the world-building lends to a world that draws from our contemporary materiality and appetite for the apocalypse. This project has been an outlet for us during the pandemic, and we hope you find a fleeting rescue in the story too.